The working principle of magnetron sputtering

The working principle of magnetron sputtering is that under the action of electric field E, electrons collide with argon atoms in the process of flying to the substrate, causing them to ionize to produce Ar positive ions and new electrons; the new electrons fly to the substrate, Ar ions are accelerated to the cathode target under the action of an electric field, and bombard the surface of the target with high energy, causing the target to sputter.

In sputtering particles, neutral target atoms or molecules are deposited on the substrate to form a thin film, and the secondary electrons generated will be affected by the electric and magnetic fields, resulting in a shift in the direction indicated by E (electric field) × B (magnetic field), referred to as E×B drifts, and its trajectory is similar to a cycloid. 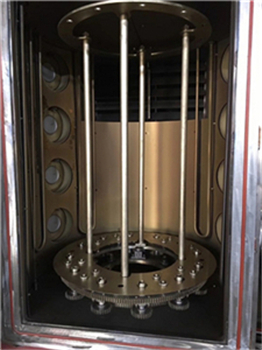 If it is a toroidal magnetic field, the electrons move in a circular motion on the surface of the target in an approximate cycloid form. Their path of motion is not only very long, but also confined in the plasma region near the target surface, and a large amount of ionization in this region Ar bombards the target material to achieve a high deposition rate. With the increase in the number of collisions, the energy consumption of the secondary electrons is exhausted, gradually moving away from the target surface, and finally deposited on the substrate under the action of the electric field E. Since the energy of the electron is very low, the energy transferred to the substrate is very small, resulting in a low temperature rise of the substrate.